How to Avoid Self-Incrimination 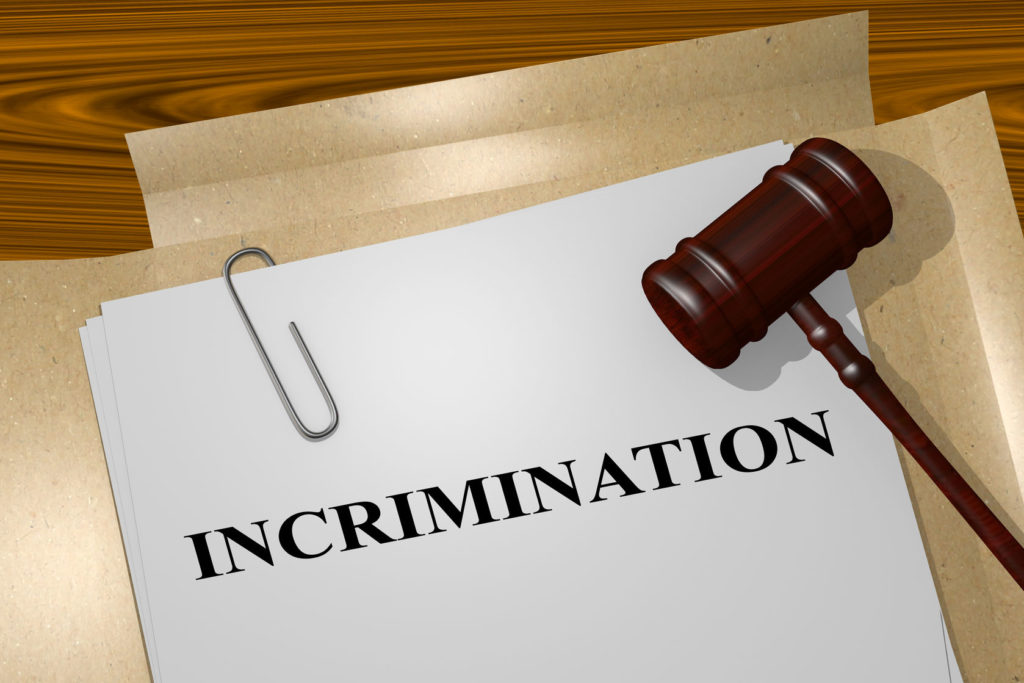 As a Jacksonville police officer takes you into custody, he informs you that:

“You have the right to remain silent. Anything you say can and will be used against you in a court of law.

You have the right to an attorney. If you cannot afford an attorney, one will be appointed for you.”

As you’re put into the back of the police car, it’s imperative you understand and heed those words. Especially the first two sentences of that Miranda Warning. They hold the key to you avoiding self-incrimination and the possibility of your words being misconstrued.

First, let’s explore what empowers your right not to make self-incriminating statements.

The Miranda Warning—often referred to as Miranda Rights—was created in 1966 when the U.S. Supreme Court ruled that whenever a person is taken into police custody, they must be informed of their Fifth Amendment right granted by the U.S. Constitution:

No person shall be held to answer for a capital, or otherwise infamous crime, unless on a presentment or indictment of a Grand Jury, except in cases arising in the land or naval forces, or in the Militia, when in actual service in time of War or public danger; nor shall any person be subject for the same offence to be twice put in jeopardy of life or limb; nor shall be compelled in any criminal case to be a witness against himself, nor be deprived of life, liberty, or property, without due process of law; nor shall private property be taken for public use, without just compensation.

That constitutional right means you’re not required to make any statements that would directly or indirectly incriminate you and could lead to criminal prosecution.

Often people feel cornered by law enforcement during questioning and believe they do not have the option of remaining silent. People are concerned with the perception of remaining silent, believing that only someone who committed a crime or who has something to hide would remain silent during questioning. Keep in mind that you have a Constitutional Right to remain silent! The State, including law enforcement, may not infer or comment on one’s right to remain silent or their choice in doing so. Regardless what you believe will be inferred from your silence, it cannot be used against you in a court of law.

In our opinion, that constitutional guard against self-incrimination is our inviolable right—one that prevents the overreach of authority from prosecuting the guilty and innocent without due process

The Fusco Law Group believes in that right so passionately, it’s the basis of our two most important pieces of legal advice to clients, friends and family:

Advice that’s applicable in any situation where law enforcement is investigating a potential crime and questioning you as a suspect or simply a witness.

If you ever have any questions about your rights, keep our phone number handy: (904) 567-3113. We’ll provide the advice you need for any situation you find yourself in.

When to Invoke Your Fifth Amendment Right Against Self-Incrimination

Simple Answer—All the Time! For example:

If you volunteer a self-incriminating statement without being pressured to do so, it could lead to criminal prosecution—even though you’ve not been informed of your Miranda Rights. You’ve indirectly made a confession and that statement is admissible in court.

This could be a conversation with a police offer during a routine traffic stop, at the front door of your home or an ID check on the street due to suspicious behavior.

If you’re not being arrested, you can exercise your right to respectfully terminate the encounter and walk away.

If the police detain you, then you have a right to a lawyer before making any statement. Use that right by respectfully invoking it to law enforcement.

When You’re Taken into Police Custody

At this point, you will probably be informed about your Miranda Rights. Any self-incriminating statement made during a custodial interrogation can and will be used in court.

That’s why an attorney should be present during any questioning by authorities. An attorney will help you invoke your Fifth Amendment rights.

During a Criminal Trial

One of the greatest attributes of the Fifth Amendment is that YOU CANNOT BE FORCED TO TESTIFY AGAINST YOURSELF AT YOUR TRIAL. However, if you choose to take the witness stand, you may open up the door to prejudicial testimony that’s not relevant to the case at hand.

That’s why it’s imperative you always have an experienced attorney to guide you through the legal process.

When You’re a Witness Taking the Stand

If you’re considered a witness to a criminal offense, you can be subpoenaed to testify. However, you can plead your Fifth Amendment Rights to remain silent if your testimony could lead to your criminal prosecution.

If there’s any inkling that what you say could incriminate you, make sure you invoke your rights and contact one of our experienced attorneys for representation.

Don’t hesitate to reach out to us at (904) 567-3113 if you have any questions or concerns about making self-incriminating statements. We’re here to make sure your all your rights are protected–always.