Amendment 4: Floridians have Opportunity to Restore Voting Rights to Felons this November

As Florida voters go to the polls this November, nearly 1.5 million Floridians with felony convictions will not be given that opportunity to have their voices heard.

That could all change if 60 percent of Florida voters approve Amendment 4—the Voting Restoration Amendment. 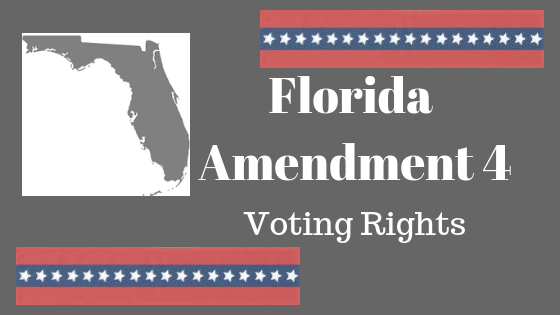 The Felon Voting Law That Amendment 4 Would Change

The Florida Constitution says that a convicted felon cannot vote until their civil rights have been restored.

This voting right restriction impacts 10 percent of the adult population in the State and makes Florida one of only four states with a policy that denies felons the right to vote after completing their sentence.

The racial impact of this law is substantial. More than 20 percent of African-American adults are unable to vote due to this law.

The Challenging Process to Restore Voting Rights of Felons in Florida

Convicted felons may apply for clemency to have their voting rights restored after a minimum five years (at times up to seven years) of completing the terms of their sentence, which includes prison time, parole or probation and paying restitution.

Unfortunately, about 10,000 applications for clemency are pending. That means individuals petitioning for clemency may wait up to 10 years before having their civil rights restoration even considered.

What Amendment 4 Would Change

Voter approval of Amendment 4 would grant convicted felons the right to vote after completing all the terms of their sentence. However, individuals convicted of murder or felony sex crimes would not be eligible for voting rights restoration.

To be approved, the amendment would require 60 percent of the vote.

The Positive Impact of Restoring Voter Rights to Felons

A couple of research reports found that approving Amendment 4 would have substantial benefits not just for felons, but for Florida’s economy as well.

A 2011 Florida Clemency Board report showed a nearly 30 percent drop in the recidivism rate when felons have their voting rights restored.

A recent report prepared by the Washington Economic Group of Coral Gables shared that a lower recidivism rate would have a $365 million annual economic impact in Florida. Some of the economic benefits would include:

However, a Florida Chamber of Commerce survey found that 42 percent of voters plan to vote for Amendment 4 while 20 percent would vote no and 36 percent remain undecided.

We’ll have to wait until the evening of Election Day – November 6 – to find out if 60 percent of Floridians will restore the voting rights of felons.

Losing your ability to vote is just one of the rights taken away if you’re convicted of a felony. Convicted felons cannot:

A criminal conviction can haunt you for a lifetime. It can impact your opportunities for employment, obtaining a driver’s license or rent an apartment.

That’s why it’s important to hire an experienced criminal defense attorney who will aggressively defend your rights throughout the legal process.

Fusco Law Group is experienced in Criminal Law. If you have questions, contact the Fusco Law Group: (904) 567-3113 for a free consultation.